10 Sophs on Turf Sunday in Let It Ride Stakes 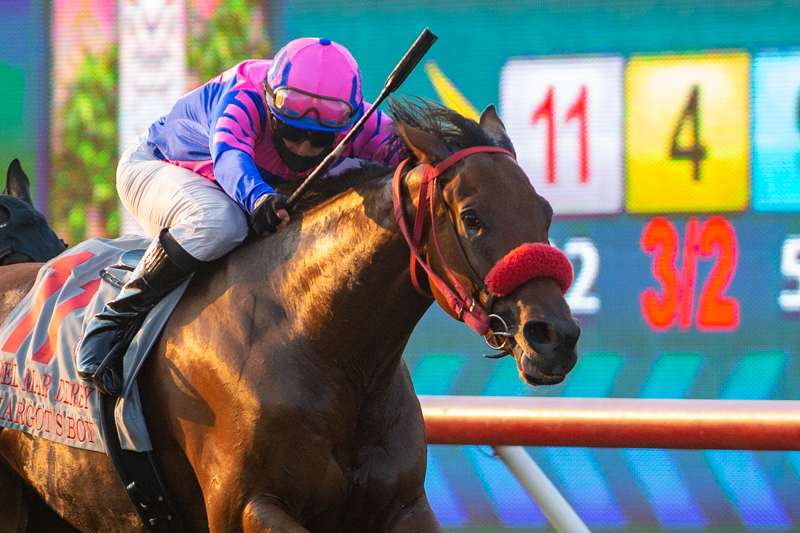 Ten 3-year-olds answered the call for Sunday’s headliner at Del Mar, the seventh edition of the Let It Ride Stakes. It goes as a mile on the turf and offers a $75,000 purse.

Following the Hollywood theme of the fall Bing Crosby Season, the race was named for the manic 1989 comedy starring Richard Dreyfuss as a sick gambler who gets a hot tip and goes on an amazing one-day run at the track (it was filmed at old Hialeah). It’s a good one to dial up if you’re stuck at home avoiding the virus.

Sunday’s turfer is headed by Margot’s Boy, a California-bred gelding by Clubhouse Ride who has won three races, and Heywoods Beach, a Kentucky-bred Speighstown colt who has a pair of wins on his ledger. Margot’s Boy is owned by Alfred Pais, trained by Craig Lewis and will be ridden by Tiago Pereira; he’s been listed at 3-1 on the morning line. Heywoods Beach is owned by Hronis Racing, trained by John Sadler and will be ridden by Umberto Rispoli; he was hung at 7-2.

Here’s the full field for the stakes from the rail out with riders and morning line odds:

Margot’s Boy last raced October 18 at Santa Anita where was beaten a bit less than five lengths in the Grade II Twilight Derby. Prior to that he was second, beaten in a photo, in the Del Mar Derby on September 6. Trainer Lewis also conditioned the horse’s daddy, who was a hard-knocking stakes winner and has become a hot commodity on the California breeding scene.

Heywoods Beach last ran in the aforementioned Del Mar Derby where he finished 10th in the nine-furlong grass test. His two victories so far were both on grass and both at a mile which, obviously, may bode well for him in the Let It Ride.

Lane Way closed fast to finish second in his most recent outing, an allowance test at a mile on the turf at Santa Anita on September 27. He’s a colt by Into Mischief trained by Richard Mandella.

Strongconstitution, by the hot young Tapit sire Constitution, has finished on the board in all six of his lifetime starts. The $220,000 2-year-old purchase was stakes placed here last fall in the Bob Hope.