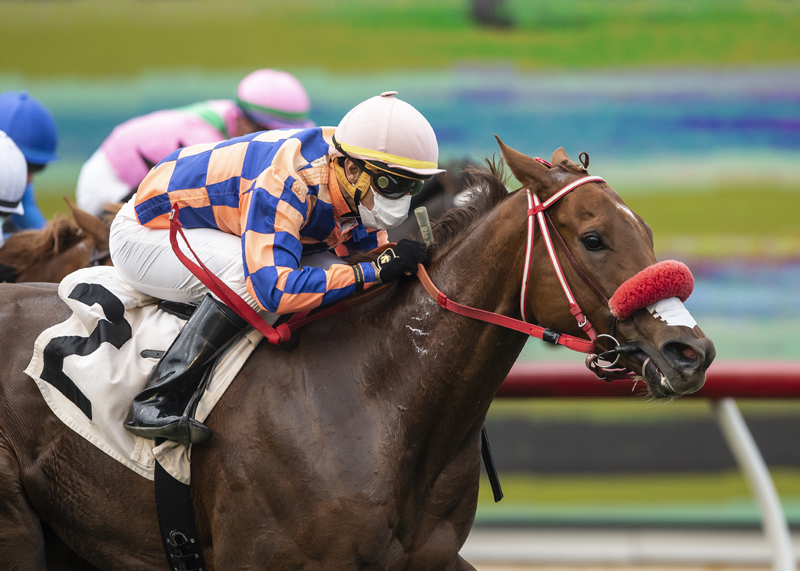 Ten fillies and mares will test their lung and leg power over a mile and three eighths on the Jimmy Durante Turf Course Thanksgiving Day at Del Mar in the seventh edition of the $100,000 Red Carpet Handicap.

Racing on Turkey Day traditionally starts early – 11 a.m. – with the thought of getting fans home in time to sit down for their big dinners. There will be no fans this year, but nonetheless the early racing holds, meaning the stakes – Race 6 on the eight-race program -- should go off at approximately 1:30 p.m.

The Grade III Red Carpet has drawn a pair of east coast invaders from the potent barns of trainers H. Graham Motion and Chad Brown and they both appear to be serious contenders in the 11-panel testing.

Motion’s horse is Eclipse Thoroughbred Partners, Cloonan and Thornton’s Blame Debbie, a 3-year-old daughter of Blame currently working on a three-race win streak. Brown has sent out Dubb, Madaket Stables or Wonder Stables’ Orglandes, a 4-year-old French-bred filly by the Irish stallion Le Harve who clicked on October 9 at Belmont Park in her second stateside start.

Also coming west to handle the riding assignments on those two are a pair of top New York reinsmen, Manny Franco for Blame Debbie and Irad Ortiz, Jr. for Orglandes.

There’s a trio of local ladies who plan to lead the not-in-my-backyard contingent – Barber or Wachtel Stable’s California Kook, Charles or Gordon’s Never Be Enough and Bederian, Kamberian or Nakkashian, et al’s Going to Vegas.

California Kook has been tackling tougher of late and has been competitive while doing so. The 3-year-old Boisterous filly was second in the Grade I Del Mar Oaks on August 22, then a close-up fourth to colts in the Grade II Del Mar Derby on September 6 and finally fifth, beaten only three lengths, in the Grade I Queen Elizabeth II Cup at Keeneland on October 10. Thursday she’ll have the saddle services of another east coaster in Joel Rosario for trainer Peter Miller.

Never Be Enough, a 5-year-old British-bred mare by Sir Percy, tallied on opening day (October 31) of the Bing Crosby Season in the Kathryn Crosby Stakes at a mile on the grass. The stretch runner has reeled off three victories in a row in the past three months, two of them against allowance horses at Golden Gate Fields. Tiago Pereira was aboard the chestnut for her Kathryn Crosby score and trainer Manuel Badilla will have him on once more on Thanksgiving.

Going to Vegas has turned in a series of sharp efforts of late while just missing finding the winner’s circle. The 3-year-old by Goldencents most recently missed in a photo to the tough filly Warren’s Showtime in the Grade III Autumn Miss Stakes on the lawn October 17 at Santa Anita. Trainer Richard Baltas sticks with her regular rider of late, Mario Gutierrez.

Here’s the full field for the Red Carpet from the rail out with riders:

Trainer Motion won the Red Carpet with his mare Rusty Slippers in 2015.