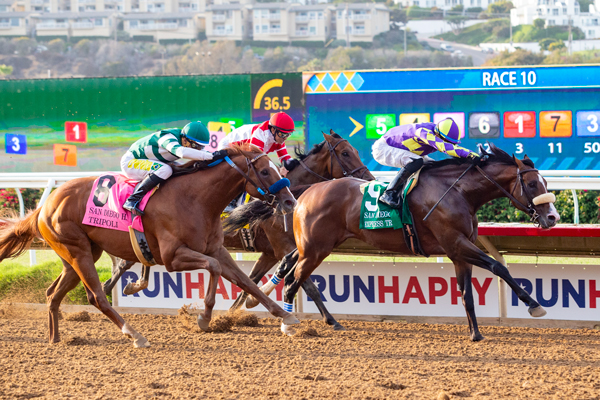 The Grade I, $1,000,000 TVG Pacific Classic will be presented for the 31st time Saturday as the featured attraction on an 11-race program that offers four other graded stakes and nearly $2.5 million in purse money. The “Classic” will be run at its usual mile and one quarter and has drawn a highly contentious field of nine older horses.

First post Saturday is 2 p.m. and the Classic – being the 10th race on the card – is scheduled to go off at approximately 6:30.

The race is a Breeders’ Cup “Win and You’re In” event providing its winner an all expenses paid entrance into the $6 million Breeders’ Cup Classic, which will be run this year at Del Mar on Saturday, November 6.

Express Train earned his role as favorite by compiling and ultra-steady mark of 12-4-4-2 with earnings of $659,300. He also was the horse home first in the key prep for the Classic, the Grade II San Diego Handicap at Del Mar on July 17. He finished a half length to the good that afternoon going a mile and one-sixteenth and beat four of the runners he’ll be facing Saturday. John Shirreffs trains Express Train and he’s once again named regular rider Juan Hernandez aboard the 4-year-old Union Rags colt.

Royal Ship is a Brazilian-bred gelding by Midshipman (winner of the Del Mar Futurity in 2008 and 2-year-old champion that year) who has steadily gotten better since coming north from his native land last year. He’s won six of 14 starts and earned $293,305 in his career so far and was third, beaten a length and a quarter, in the San Diego. Hall of Fame trainer Richard Mandella has once again named Hall of Fame rider Mike Smith to guide Royal Ship on Saturday.

Dr Post is in from the east coast where he’s proven to be a solid stakes competitor with four victories in nine starts for earnings of $700,635. His most recent outing was a tally in the Grade III Monmouth Cup at Monmouth Park in New Jersey on July 17. Hall of Fame trainer Todd Pletcher has commissioned Joel Rosario to ride the Quality Road colt in the Classic. Rosario, a three-time Del Mar riding champ prior to shifting his tack to the east, has twice come west to capture the Classic – with Dullahan in 2014 and Accelerate in 2018.

Here’s the full field for the TVG Pacific Classic from the rail out with riders and morning line odds:

Tripoli, a 4-year-old colt by Kitten’s Joy who races out of the barn of trainer John Sadler, was a closing second in the San Diego behind Express Train. That was the chestnut’s first try against stakes horses in his 13th start and he acquitted himself well.

Tizamagician is also trained by Mandella and gets the extra benefit of Del Mar’s leading rider in Prat. The 4-year-old Tiznow colt came home first in the Grade III Cougar II Stakes at 12 furlongs at Del Mar on July 18 in his most recent outing.

Independence Hall will be making his first start in four months. The Constitution colt has won four of 10 starts and has banked $233,800 working under the tutelage of conditioner Mike McCarthy.

As part of the festivities around the track’s signature event, the grand old warrior Lava Man — now in his 20th year — will lead the parade to the post for the race. He won the Pacific Classic in 2006 and following his Hall of Fame racing days transitioned to the role of chief stable pony at trainer Doug O’Neill’s barn where he is affectionately known as ‘Coach.’

In the 30 prior runnings of the race, the average field size has been 8.7, so this year’s grouping falls right in line with that.  The fastest running of the race on dirt was the 1:59.11 turned in by Candy Ride in 2003. Last year’s winner of the Classic was Gary and Mary West’s Maximum Security.