Making of 'The Book' 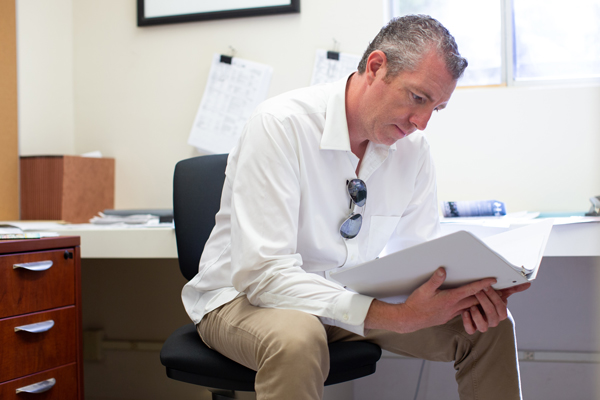 If you’re not a racing insider you most likely don’t know how important a man like David Jerkens is to a race-meet or even know his name, and if you ask him that’s a good sign he’s doing something right. Jerkens is the Racing Secretary for the Del Mar Thoroughbred Club and the person responsible for providing the entertainment so fans have a reason to show.

He’s considered an executive as the head of his department but few would call his hours or his workload glamorous. Jerkens is responsible for everything horse, owner and trainer related and that involves some heavy components to the overall summer season, including writing the races to be run, organizing the trainers and their horses as they ship in looking for a place to call home, overseeing a full staff and horsemen inhabiting the fairgrounds, and all the while putting out countless fires. As Jerkens puts it, it’s a thankless job, but a very necessary one.

Putting on a race begins long before it’s ever run. “The book,” referring to every horseman’s North Star, is the condition book in which all races for weeks at a time are contained, with the conditions, or guidelines, for each clearly set forth for trainers, owners and jockey agents alike to peruse. It provides everyone with the same information to map out where their horses can or should be entered to run. Its infinite complexity lies in the fact that it is a dance, aiming to entice entries in the races presented while also being as attractive as possible to all connections involved. Horses being entered is the single most critical component of a successful meet, paving the way for fans to watch and wager on anything at all and the first step towards that success taken by none other than David Jerkens himself.

Weeks before Opening Day Jerkens starts plotting out the first book (three will be released in total this summer meet) using hand-written charts and attacking it all like a complicated equation. There are X number of horses on-site, Y number that will ship in, and all of those separated further into categories of sex, age, surface (dirt or grass) and distance preferences. 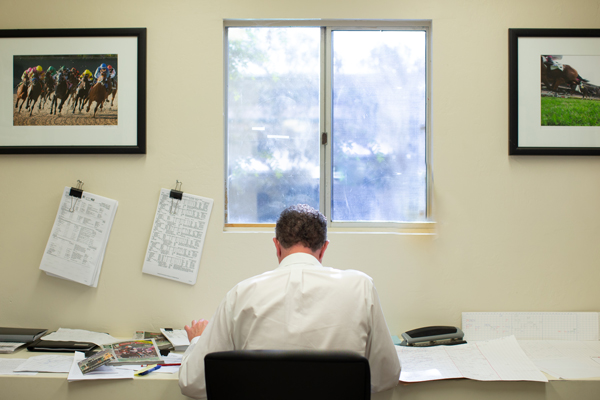 “It’s a process,” David says. “I start with my stakes schedule and work backwards. I then plot the preps for those stakes, and backwards again, and again. Early on I have a blueprint before the meet but as I get more familiar with the inventory of horses, I’m constantly tweaking that overall picture. I have to constantly evolve and it’s never an exact science. I have to weigh that information against all the daily requests I’m getting from trainers and owners about what they’d like to see offered.”

When asked if years into the gig he’s still nervous when he releases the information, he nods emphatically. “I still get a little nervous, yeah. I hit send on the mass email before it’s even in hard copy form and I am definitely checking my emails regularly. When I don’t have any emails and it’s quiet, I feel confident a good book was produced.”

Besides manufacturing the condition book Jerkens deals in people, first and foremost. Hundreds of trainers and owners call, email and stop by to discuss their issues or requests but rarely to offer praise. As he puts it, “If I’m not hearing a lot, that’s my pat on the back.”

As the son of a trainer and grandson to renowned Hall of Famer Allen Jerkens, or “The Chief” as he was often proclaimed, Jerkens is adept at knowing his audience and adjusting accordingly to be as accommodating but also as productive as possible. “It’s a unique business and I know what makes a trainer tick.”

As a boss of many he deals in being the disciplinarian as well. “If a rider needs to be written up or reported to the Stewards, that’s a call I’ll definitely get,” Jerkens remarks. “If a stall is broken I’ll get a call. If their cable TV is out I’ll get a call. If the toilets in the jocks room aren’t working, that’s me. They like to call me no matter what so I’m aware. They usually just want to know they’re being heard so I try and always oblige.”

David Jerkens doesn’t really have days off during his season. There is still training seven days a week and there’s always a phone call only moments away. Slower days are simply an opportunity to get out of the office and walk the barns. He knows how important people are to his role, but he likes being reminded of what the entries truly consist of, horses. 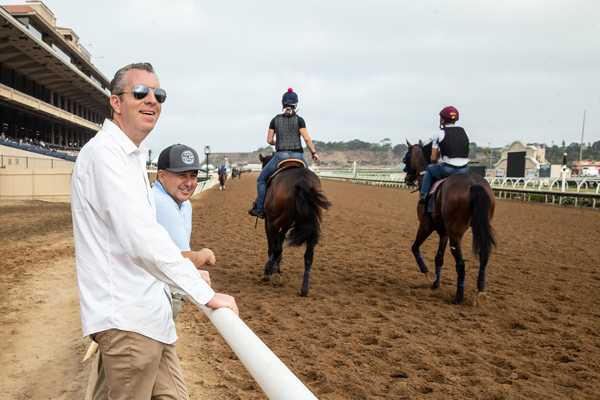 “It helps my sanity to get out of the office, it’s refreshing,” Jerkens admits. “You get so caught up with the numbers and the paperwork that it’s really nice to go out and watch horses walking around, being groomed and bathed, and to get to speak with everyone, not just trainers. I get to engage more, it’s really nice and I prefer to communicate that way.”

It is now about 10:00 a.m. on a Friday and the Racing Office is taking entries for Wednesday. “As the morning goes on I’ll get a count, I’ll update the agents, and then I’ll send out a mass text to horsemen about how the races are filling. I’ll do that about every half an hour and then at about 9:45 a.m. to 10:30 a.m. is when we’ll tend to see the rush of entries.”

Jerkens believes in communication. “There are some Racing Offices that won’t say anything all morning long during the entries,” he says. “But I don’t like that. I feel you work with the agents, the trainers, and it benefits all of us in the end.”

His days are split in half in both his tasks and his location. The mornings consist of taking entries in the barn area offices and after the draw is complete around lunchtime he’ll make his way over to the grandstand to change and begin his afternoon, which is practically another full time job. He may have started at 7:45-8 a.m. but his day is still less than half over. 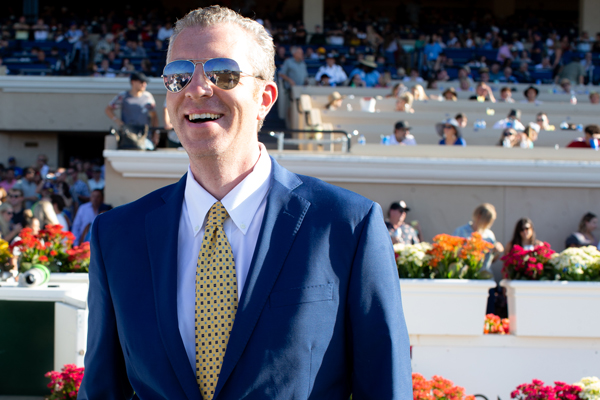 The race day will be spent between his frontside office, his phone, trying to record and assess ongoing statistics as the races are going while simultaneously being chatted up by any number of passers by, visiting the paddock, the Winner’s Circle, and generally shaking hands and trying to stay present with the many people that depend on him.

As the raceday ends Jerkens knows it will start all over again the next day and continue at breakneck speed until September 2, Closing Day. As he says, it’s necessary, and by all accounts he loves being needed.