John Velazquez Makes Himself at Home at Del Mar 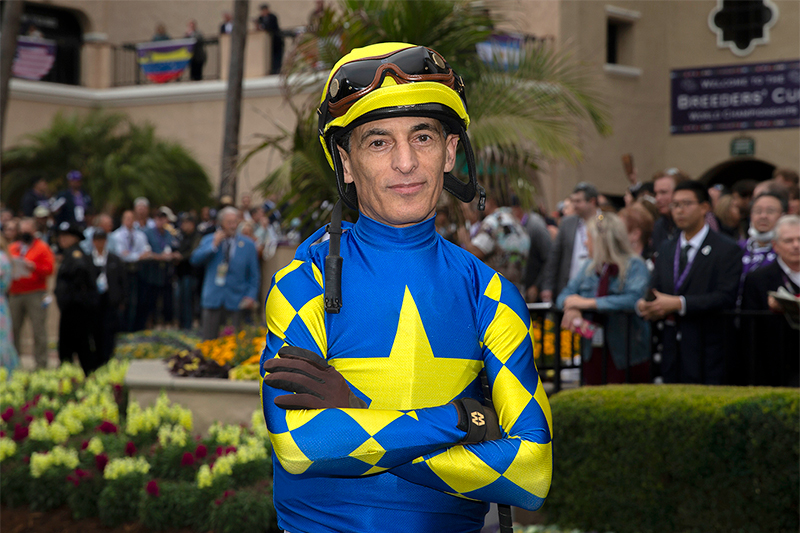 The jockey colony at Del Mar is constantly evolving. New riders come in every year, while some leave for other circuits. But it’s not every year a Hall of Fame jockey joins the ranks. This fall the number of inductees in the jockeys’ room at Del Mar increased by one with the addition of John Velazquez, longtime riding star in New York.

The 50-year-old Velazquez joins fellow inductees Mike Smith, Victor Espinoza and Kent Desormeaux, though he is not exactly a stranger to Del Mar. Velazquez, who’s been riding since 1990, came out west and rode in his first race at Del Mar in the 2015 Matriarch. He’s since ridden in 72 races at the seaside oval, winning 17. His biggest wins at Del Mar came in the 2017 Breeders’ Cup when he won the Distaff aboard Forever Unbridled and the Mile with World Approval.

This winter, Velazquez plans to ride fulltime at Santa Anita and he’s hoping to use the fall meet at Del Mar as a sort of springboard.

“I wanted to get it started here so the trainers and owners know I’m going to be here for the winter,” Velazquez says. “Hopefully I’ll get the opportunities to ride some real nice horses here and keep me going for the winter.”

Velazquez has been on some of the best. He’s ridden three Kentucky Derby winners; Authentic (2020), Always Dreaming (2017) and Animal Kingdom (2011). Four if you include Medina Spirit, who was disqualified a year after winning the 2021 Run for the Roses.

He added his 19th Breeders’ Cup win this year when he got Malathaat up at the wire to win the Distaff. He’s second to Mike Smith’s 27 Breeders’ Cup victories. In all, Velazquez has won over 6,400 races, nearly 700 of them stakes and more than 200 Grade 1’s.

So it comes as no surprise that the two-time Eclipse Award champion would start the Bing Crosby meet with back-to-back winners on opening day but Velazquez insists there is a learning curve at every track.

“It’s like everything, you have to adjust to wherever you go,” Velazquez says. “Every racetrack has different turns and where the poles are. You have to get used to it and do your homework and hopefully you get some nice horses and they respond to what you like to do. I got lucky (on opening day); the horses ran really well.”

Velazquez’ experience with horses dates back to his days as a kid growing up in Puerto Rico.

“I grew up around horses,” Velazquez says, “and I met Julio Garcia when I was 14-years-old. He was the leading rider in Puerto Rico. That got me interested in racing.”

Velazquez arrived in New York in 1990 where another Hall of Fame rider, Angel Cordero Jr., took him under his wing. It wasn’t long before “Johnny V” was winning graded stakes races and making a name for himself. But don’t ask him who his favorite horse is. There’s been too many.

“I’ve been so blessed to ride so many good horses,” Velazquez says. “That’s what keeps me here and gives me the career that I have so far.”